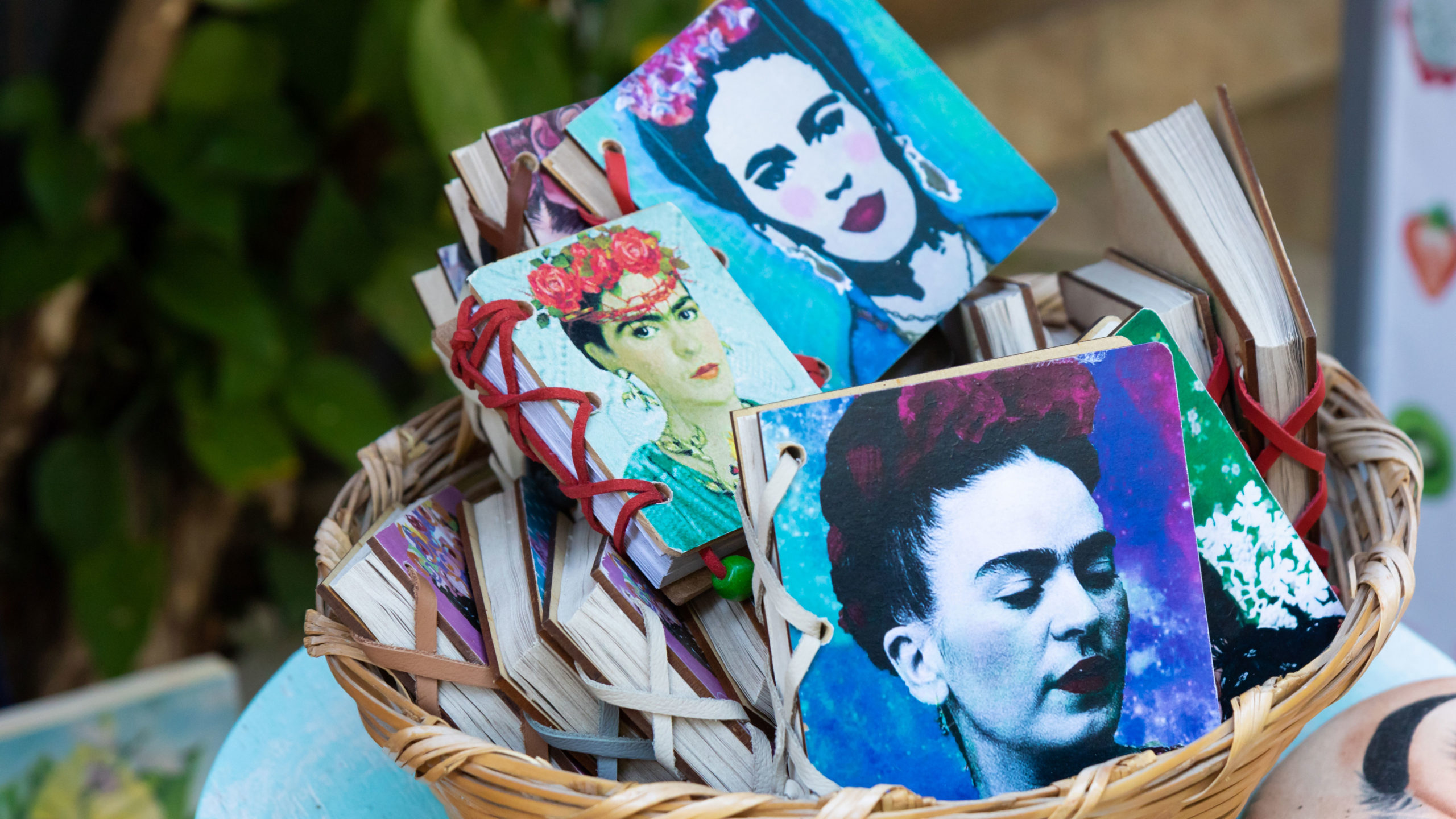 Nowadays Frida Kahlo is everywhere: on earrings, bag prints, mobile phone covers, even tattooed on skin! The same goes for all the gadgets that refer to her style too, inspired by ancient South American civilisations. All of a sudden her troubled life story became known to everyone, with thanks going also to the exhibitions that were dedicated to her and which have multiplied in recent decades. She has been recognised as a painter, has become an icon of the contemporary world, and a model for girls all over the planet. But why?

The reasons are manifold and I will try to illustrate them step by step in this article, starting with her work and in particular those that represent her body, which reveal to us the complexity of Frida’s life and soul.
First of all, here is one of her innumerable self-portraits, a type of painting she always favours, next to an actual picture of her:

Between the two, Frida looks much prettier in the photo. This is because the characteristics of the photo do not want to be changed but instead, represented in a real way. The self-portrait however, with the use of vivid and strong colours, seems almost as if it is about to explode, eager to go beyond the contours and allowing the painter to make the portrait as tangible as possible. She always accentuates some of her facial features, a reason for which she has become famous, such as her eyebrows, or a slight moustache. While these may not make her look attractive, Frida emphasises them without shame. She does not adapt to the model of femininity demanded by society, but proudly maintains its peculiarities, which make it original and above all “herself”.

Let’s look at another picture, The Two Fridas:

The Frida on the right is dressed in traditional Mexican dress and has a Latin complexion. She is holding a photo of her beloved Diego Rivera as a child, and boasts a red and healthy heart from her chest. On the left, Frida is depicted with light skin and dressed in a European manner, her heart open and torn. The two Fridas are not only linked by the holding of hands, but also by a vein uniting the two hearts. The “double” theme is always present in Kahlo’s work and is another reason for her extreme modernity. There is no sweetened image but instead, a psychological introspection that highlights the facets and contradictions of our soul.
It was painted during the period in which the artist had separated from Diego who, in addition to numerous other infidelities, had come to betray her with her sister.
“I suffered two grave accidents in my life… One in which a tram knocked me down, and the other was Diego” is a famous phrase of Frida’s. It symbolises the tumultuous but indestructible relationship between her and Rivera with suffering, fragility, and the difficulty in controlling one’s own feelings (the scissors that can’t stop the bleeding) on one hand, and on the other, happiness and health (note the colourful clothing). So could it be then that the red of the hearts which dominate the painting are not representing life and passion but instead, blood and danger?

The above painting contains several objects including a hip and a fetus. The subject, as can be guessed, is abortion. Abortion was a trauma that Frida experienced on two occasions due to her body being unable of carrying out a full pregnancy. When she was 18, Frida was a victim of a bus accident that saw her impaled by a handrail. She would have to under go 32 operations in the years that followed in an attempt to heal the fractures sustained. Several of her paintings depict the pain she felt regarding this impairment, as well as that which she felt after contracting Polio at the age of six. Frida is not afraid to show her suffering, she wants to make us participants.
In this painting she is seen lying on a bed almost as if it were a cage from which she cannot escape. In the background of a desolate and indifferent environment is an industrial city, contrasting the human and emotional charge that the scene communicates to us. She touches on subjects that relate to the female universe and, just as she does in this painting, she also does in “Two Nudes in a Forest”, a painting which depicts two women who love each other. For this reason she has been called a feminist before her time, free to express herself through style and emancipated in relationships (following her husband’s betrayal she had extramarital affairs with both men and women).
Finally, she is remembered for her resilience despite all her misfortunes, fighting on no matter what. Most importantly though, she is remembered for having found the courage to recount her story, in a crude but intimate way, through art.

For those wishing to fully immerse themselves in the world of Frida and learn more about her life, I would like to point out that a very engaging exhibition will take place in Rome, from October 12th 2019 until March 29th 2020. Below is the link to the official website: http://www.spazioeventitirso.it/en/

Below, I selected a series of fashion accessories related to the Frida Kahlo style!

Bracelet Fiori – Braccialini
This bracelet will be a perfect match with any dress you choose.

Medium Sicily Bag in Portofino print Calfskin – D&G
Inspired by the geraniums from Sicilian gardens and terraces, this medium Sicily bag comes in printed and hand-finished Dauphine calfskin. The print with warm, vibrant colors has been carefully placed on every single panel to guarantee perfect design continuity.

Silk headband with floral print – Gucci
Created from ivory silk, the headband is animated by a colourful floral print and features a knot detail at the front.